The mid-cycle refresh for Audi’s three-row SUV is downright refreshing.

Vehicles lifecycles follow a pretty familiar pattern. They debut, and after a few years, a significant refresh happens with a full redesign coming a few years later. Based on this blueprint, one would expect the 2020 Audi Q7, four years on from its last redesign, to improve in ways that freshen its appeal amidst newer competition.

Yet reviewing the list of changes for the 2020 model year introduces some questions. With a new engine, updated exterior and interior design, and a new generation of convenience and safety technology, has the latest Q7 undergone a more substantial evolution?

To properly appraise the 2020 Audi Q7, we need some time in the saddle, which brings us to Palm Springs, California for a first drive.

For years, Audi stood at the forefront of convenience technology. The German automaker effectively made fully digital instrument clusters a thing with its Virtual Cockpit in 2014, and its latest generation MMI infotainment with haptic feedback is the kind of intuitive in-car tech that can legitimately and safely replace most physical controls. For 2020, the Q7 inherits both standard goodies – a new generation of Virtual Cockpit and MMI module – from Audi’s flagship Q8.

The second iteration of Virtual Cockpit is a stunning HD display with noticeably faster processing, meaning you can whip through the navigation, media, smartphone, and telemetry views on the 12.3-inch monitor without hesitation. Drivers can customize the gauge theme through the center display, but all other adjustments are at the fingertips with steering wheel controls.

Save Thousands On A New Audi Q7 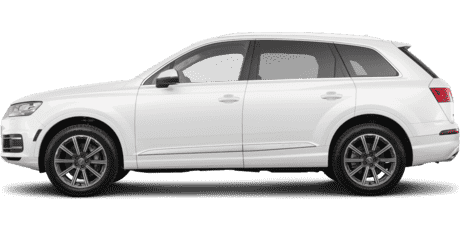 Audi’s third generation MMI module layers a 10.1-inch display above an 8.6-inch unit along the center stack. The upper monitor manages every convenience, driving, and safety setting the Q7 has to offer, while the lower display houses HVAC controls and programmable shortcuts. This separation of powers means you’re never hunting for quick adjustments like cabin temperature and affords more real estate to media or navigation.

The intuitive trick to Audi’s latest infotainment is its haptic feedback and the audible “click” that accompany inputs on either display. In a driving scenario, feeling and hearing the system means you don’t need to double-check a command and can instead keep your eyes on the road. Sure, cranking a knob will always be quicker, but Audi’s system is one of the most adaptable in-car touchscreens we’ve encountered.

The introduction of wireless Apple CarPlay to the Q7 means you can cut down on clutter, too. And if you still need a charge, the optional wireless charging pad and signal booster come in handy. Those with Android phones will still need to plug in, but everyone benefits from a standard LTE Wi-Fi hotspot. Optional upgrades like a large color head-up display and a 23-speaker Bang & Olufsen sound system should appease visual or audiophiles as well.

Those with weak bladders may be the exception, but driving the 2020 Q7 won’t allow many excuses to press pause on a road trip; this thing gobbles tarmac and spits out comfort (how’s that for a visual?). The road warrior formula comes down to Audi’s new turbocharged 3.0-liter V6 (shared with the Q8), available air suspension, driver assistance features, and interior refinement.

Replacing the outgoing supercharged V6, this new turbo mill is marginally more potent at 335 horsepower and 369 pound-feet of torque. The passing power is there, and cornering is even a small thrill thanks to adaptive dampers and Quattro all-wheel drive sophistication, but the V6’s real merit is its smoothness. Paired with a silky eight-speed automatic transmission, the powertrain works effortlessly to produce forward momentum with imperceptible turbo lag. If you fancy bringing a trailer on your journey, take confidence in this SUV’s 7,700-pound towing capacity, but be wary: the Q7’s 17 city, 21 highway, and 18 combined miles-per-gallon ratings will take a slide. Those concerned with fuel economy can still equip Audi’s carryover 2.0-liter turbocharged four-cylinder rated at 248hp and 273 lb-ft (EPA ratings are not yet announced).

Whichever engine you choose, the Q7 affords excellent ride quality with its standard steel springs and adaptive dampers. Assuming you don’t frequent rock quarries, this setup culls the worst of road imperfections to transport up to seven passengers in comfort. Upgrading to the optional air suspension vaults the Q7’s ride quality into the realm of Range Rovers; floating is more the sensation. As an added benefit, the air-suspended Q7 can raise its ride height for off-roading or lower it for easier access to the cargo or cabin.

To reduce driver fatigue and help assure the family makes it to the destination safely, the 2020 Audi Q7 offers a comprehensive suite of active driver aids. Audi’s low speed automatic emergency braking and lane departure warning is standard, while traffic sign recognition, a top-view 360-degree camera, and blind spot monitoring with rear cross-traffic alert are available. New for the 2020 Q7 is Audi’s Emergency Assist, which will initiate a process of alerting and eventually slowing the Q7 to a stop if the driver does not regain control. Thankfully, we don’t need to test these emergency systems, but Audi’s available adaptive cruise control and lane keeping assist work in tandem to chart highways and changes in traffic seamlessly.

The 2019 Audi Q7 is respectably handsome, but doesn’t deliver the same dazzle as the modern, coupe-inspired Q8. Some things aren’t shared within the platform (namely the Q8’s roof rake), but Audi saw potential in the 2020 Q7’s design.

At the front, the outgoing Q7’s octagonal grille trades horizontal slats for vertical ones that feature either satin chrome or black finishing (with the $1,750 black optic package). The front spoiler gets a small touch-up to complement the new grille, but the Q7’s eyes are where you’ll direct yours. Standard LED headlights replace the 2019 model’s HIDs, and optional HD Matrix lights with or without with laser light beams give the Q7 a bold expression. Matrix lights, which can switch on or off light-emitting diodes to only illuminate the road (and not oncoming or leading traffic) have not yet been approved by US regulators, but Audi assures us that when the tech is approved, a simple software update will unlock this feature on equipped models. For now, we can at least appreciate the sharp look and neat animations when locking or unlocking the vehicle.

In profile, the changes are minimal. Audi tweaked the rocker panels and added new 19- , 20- , and 21-inch wheel designs. At the rear, the Q7 gains a strip of chrome to connect the updated LED taillights and a re-sculpted lower bumper with integrated exhaust ports. On paper, these design changes don’t sound like much, but the impression in person is that of a more upscale and contemporary luxury SUV.

Inside, the aesthetic enhancements are even more profound. The redesigned center stack, free of the usual smattering of controls, is clean and contemporary. Vivid displays and available ambient lights sparkle when the Q7 is on and blend seamlessly into the dashboard when off. Like the Q8, piano black and brushed metal span the dashboard and center console, with a choice of open pore wood or metal trim to match. A standard panoramic sunroof fills the cabin with light, but can be covered with a power closing shade. We experience a very real urge to applaud Audi’s interior designers – especially while receiving a massage from the available Valcona leather seats.

Call it a mid-cycle refresh or something more, the 2020 Audi Q7 is unquestionably stiffer competition for the BMW X7 and Mercedes-Benz GLS-Class – at thousands less to start. If money is no object, you might still be swayed by BMW or Mercedes extravagance, but the Q7’s class-leading convenience features, fresh design, and powertrain enhancements make a strong appeal to all other luxury SUV shoppers. Now let us at that 500-horsepower SQ7, would ya Audi?

Audi SQ7 By ABT