Chevy’s sub-compact replacement is vastly better to drive and live with.

I would recommend the 2021 Chevrolet Trailblazer to a friend. That's a big deal, considering there isn't a world where I'd suggest the Chevy Trax. If they said to me, “Hey Brandon, should I buy a Trax or try to get to work on the back of this feral donkey?” I'm voting for the ass. While the Trax may be less stubborn than a wild pack animal, at least the donkey wouldn't cost so much while offering so little.

Chevy's previous subcompact crossover was too pricey for what it was – when I drove the refreshed 2017 Trax, the as-tested price sat just a smidge under $30,000. And you did not get a lot for your money – a wheezy turbocharged four-cylinder, a shoddy cabin, an ugly exterior, and a ho-hum roster of equipment, the highlight of which was Apple CarPlay and Android Auto. Those ills, among others, conspired to produce a deeply unlikable car that, nevertheless, could still manage to do the bare minimum customers would ask of it.

For 2021, Chevy reintroduced the Trailblazer badge. We'll ignore Chevy's sullying of yet another one of its SUV names, though, because while the Trailblazer is anything but a successor to the truck-based three-rower from the 2000s, it's a vastly more competent, likable product that addresses most of the Trax’s problems. Especially if you value equipment, the new Trailblazer is hard to ignore.

The Trax is one of the least exciting pieces of design in GM's history. Bloated, curvy in all the wrong places, and with an oafish face, it exemplified all that was wrong with Chevy's design in the 2010s. The Trailblazer is a radical departure, adopting similar proportions but aping the attractive styling of the larger Blazer. Sharp lines on the hood and the aggressive-looking LED running lights complement the gaping grille, which our Trailblazer RS' black body and dark-chrome trim hides somewhat.

Save Thousands On A New Chevrolet Trax 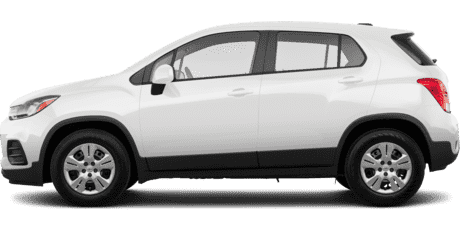 The profile gets a strong, downward-sloping character line that creates a meaty rear haunch and a fast C-pillar, while in back, prominent body work terminates at the midline, creating the subtlest boat-tail look possible. It's all very good stuff and a huge improvement over the jellybean-like Trax.

The cabin is similarly more expressive. Attractive shapes dominate, with an amply sized 8.0-inch touchscreen sitting front and center. The piano black trim that surrounds this display is one of the few spots of brightwork in the RS trim's otherwise black cabin, along with red anodized accents (like what you'd find on the Trailhawk version of the Jeep Cherokee or Renegade). The entire red and black theme inside and out feels like Chevy is trying too hard, but compared to how little the company tried on the Trax, any additional effort is welcome.

The Trailblazer RS has dash and door plastics that feel cheap and flimsy even by the ultra-low standards of its class.

While Chevrolet introduced a more exciting design, it hasn't done much to address the materials. The Trailblazer RS has dash and door plastics that feel cheap and flimsy even by the ultra-low standards of its class. Plastic is the dominant material here by a huge margin. Even the RS' seats – a mix of cheap vinyl and even cheaper-feeling fabric – disappoint. The only bit of plastic that could pass for soft touch is the vertical part of the dash, which has a nice texture and out-of-the-way red stitching.

Material quality aside, I have broader concerns about the build quality. Unlock the doors with the key fob and there's a dull, overloud thunk as the mechanism works. The door handles feel flimsy, the doors super light, and the sound when closing is tinny. There's noticeable flex and creakiness in all the interior bits, too. Some of these things are common in subcompact vehicles, but the Trailblazer's quality issues were more noticeable than any of the competition.

Chevy ditched the Trax's turbocharged 1.4-liter four-cylinder for a pair of turbocharged three-cylinder engines. Front-drive models, like my tester, are available with either a 1.2-liter or a 1.3-liter and a continuously variable transmission – the RS and Activ, the only trims available to the media at the moment, as well as every all-wheel-drive variant carry the larger engine as standard.

It's not really clear why Chevy is offering two similar engines on the Trailblazer, as their output isn't all that different. Like most turbo-triples, torque is the headlining stat, with 162 pound-feet in the 1.2 and 174 lb-ft in the 1.3. There's also 137 horsepower and 155 hp, respectively. That said, you're more likely to find the 1.3-liter on dealer lots, owing to its exclusivity on all-wheel-drive models while the 1.2's available on just the front-drive versions of the fleet-only L, base LS, and volume LT.

The difference between the 1.3-liter three-cylinder and the 1.4-liter four from the Trax is night and day.

The difference between the 1.3-liter three-cylinder and the 1.4-liter four from the Trax is night and day. Like the turbo threes from Ford and BMW, there's a diesel-like quality to this engine, with mammoth amounts of torque available at low engine speeds (1,600 rpm, in this case) and an eagerness to deploy that twist. Push the Trailblazer's triple past 3,000 rpm, though, and the engine runs out of steam quickly – this is unquestionably a slow vehicle, but if drivers can resist the urge to bury the pedal, the 1.3 rewards them with effortless low-end shove and a complete lack of drama that makes freeway driving easy.

This is a thrifty engine, too – on a 100-mile highway run, we beat the 33-mpg EPA estimate by a point. After another 80 miles of mixed driving, the on-board computer indicated I was still averaging around 33 mpg.

The sound of the 1.3-liter is there along the way to encourage this sort of efficient driving. Three-cylinder engines simply sound bad, with an unbalanced coarseness that penetrates the cabin, but only when you abuse them – drive responsibly and this engine type is typically whisper quiet. That's the case in the Trailblazer.

I wish I'd had the opportunity to test the Trailblazer with the nine-speed auto, as I've been happy with it in a wide range of GM products. This CVT is an admirable stand-in, though, exhibiting excellent behavior under hard throttle, while responding readily to the light throttle applications the three-cylinder craves. All-wheel drive is a tempting partner in snowy climes, but puttering about in a front-drive Trailblazer hardly demands serious sacrifices.

Chevy's engineers managed to improve the ride, too, despite retaining the same McPherson strut/compound crank suspension setup. The Trailblazer feels more composed over rough terrain, handling bumpy roads with high-frequency imperfections well. It's no off-roader, but I still blitzed a few dirt trails during my day behind the wheel, and the level of stability on display was admirable.

There's too much wind, road, and tire noise, though. You'll find a quieter ride from Mazda or Hyundai. Speaking of the CX-30 and Venue, both offer a far more rewarding handling experience, not that I ever felt confident enough in the Trailblazer's electric power-assisted steering to push into a turn too hard. The tiller is light as a feather and wholly devoid of feedback. I never had enough faith in what the front axle was doing to really exercise the Trailblazer's handling, although the predominant impression it gave me was one of heavy but progressive body roll.

The best reason to buy the Trailblazer, though, is the sheer level of equipment on offer. This is one of the most affordable vehicles on the market to offer wireless Apple CarPlay and Android Auto and it offers an impressive array of active safety gear. The 8.0-inch touchscreen feels faster and more responsive than any GM product I've tested recently, too, despite running the same software.

But these goodies come at a price, and in the case of my tester, it's an eye-watering $30,850. You'd better plan on spending near that much if you want the headlining features. In classic GM fashion, Chevy has limited these marquee bits to its two range-topping trims, the Activ and RS.

While even the $19,995 base Trailblazer comes with automatic emergency braking with pedestrian detection, automatic high beams, and lane-keep assist, only Activ and RS models are available with adaptive cruise control. And every Trailblazer requires a premium for blind-spot monitoring and rear-cross traffic assist. But the Trailblazer LS get the biggest shaft, as Chevy doesn't even offer cruise control as standard.

The best reason to buy the Trailblazer is the sheer level of equipment on offer.

Ultimately, my problem with the Trailblazer's price isn't the price itself, but that there's so much competition at $31,000. Not only do fully loaded, all-wheel-drive-equipped (where available) versions of nearly all its rivals undercut that price, but so do some very nice examples in the next class up.

Why would I buy this tiny, front-drive $31,000 Chevy when I can get a bigger Honda CR-V EX with all-wheel drive, more power, and a more comprehensive safety suite for the same price? All you're really giving up in that situation is wireless CarPlay. I have nothing to support this theory, but it almost feels like Chevy priced the Trailblazer expecting to throw a few thousand dollars on the hood.

And that's mostly fine, if it turns out to be the case. At $25,000 or $26,000, a Trailblazer like the one featured here represents a very good value. It's a likable small CUV with a potent engine and a pleasant enough driving character, as well as some neat options. But if there's a dealer asking you to pay full price, you can and should walk to the nearest Honda, Hyundai, or Mazda dealer. That's what I'd recommend to my friends. 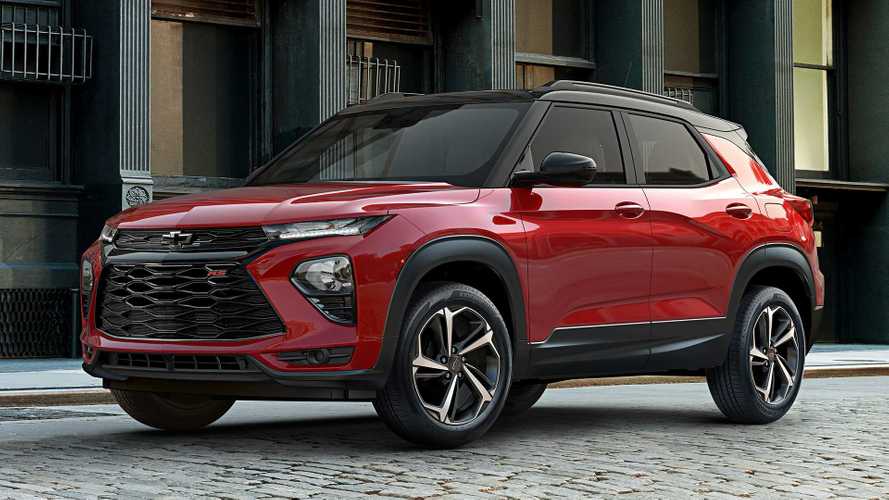 Sell anything (free), get featured here